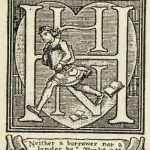 Thomas Moring, a 19th century “die-sinker, gem engraver, heraldic artist and seal engraver” was known to have been active from 1840 to 1900, appearing in records at an address in Lincoln’s Inn Fields and then later in High Holbern. The engraver also seems to have been a prolific ex libris artist END_OF_DOCUMENT_TOKEN_TO_BE_REPLACED 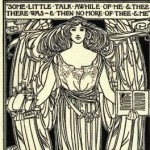 Boston book designer, illustrator and teacher Amy Maria Sacker (1872-1965) was one of several bookplate artists to be celebrated by the Troutsdale Press and bookseller Charles E. Goodspeed – also from Boston – in a series of short volumes dedicated to the work of ex libris designers of the day. END_OF_DOCUMENT_TOKEN_TO_BE_REPLACED 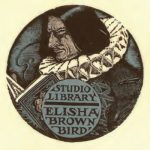 At the beginning of the last century the Boston-based publisher Troutsdale Press published several small volumes on the work of bookplate artists of the day including a 1904 study of the work of Elisha Brown Bird (1867-1943) in ‘E. B. Bird and his Bookplates’ by Winfred Porter Truesdell. END_OF_DOCUMENT_TOKEN_TO_BE_REPLACED

Posted in Bookplate Artists | Tagged Bookplate Designer, E.E.Bird
Like most websites we use some unobtrusive 'cookies' to store information on your computer. More info