The Origins of Ex Libris

Bookplates in the Beginning

Time-honored custom seems to demand that elementary expositions of the nature and use of bookplates should open with an explanation of the early use of heraldry on bookplates. In olden times, the ability to read and write not being an accomplishment of the multitude, the bookowner would naturally choose an armorial achievement with which to mark his books because of the meaning it would convey to anyone who might find the book, whether he could read or not.

The bookplate, then, is simply a mark of possession that the booklover pastes in his books, usually on the inside of the front cover, to denote his ownership. I say booklover advisedly, because the casual possessor of a library rarely cares enough for his books to want to endow them with his name in this manner. On viewing a large collection of bookplates, one is led to the conclusion that the subject-matter for bookplates unlimited. In early times we find heraldry dominating for the practical reason already mentioned ; but more freedom was given the bookplate artist as learning became more widespread.

Gradually, the custom of ornamenting the shields of arms by adding rococo or Jacobean scrolls, or by adding mantling, came into use, and, a little later, we find personal symbols other than heraldry entering into bookplate design. Sometimes the heraldry was entirely superseded by such symbols where the love of books had spread to people not entitled to the use of armorial bearings or who considered other elements of design more appropriate for the purpose. Then, gradually, the early conventional symbolism gave way to portraits, to decorative motifs, sometimes architectural or purely ornamental and sometimes such things as piles of books, or to landscapes or library interiors. Garden bookplates showing garden views are also frequently used with good effect. Indeed, there seems to be practically no limitation to the choice of bookplate motifs except good taste and that imposed by the small size of the ordinary bookplate; which exercises the artist's skill more than most of us realize.

The bookplate, or ex-libris if you choose, ex-libris being an adaptation from the Latin generally taken to mean 'from the books of', is one of the simple joys of life. With it the booklover shows his affection for his books. The bookplate is, as a rule, an unobtrusive creature resting modestly within the covers of a book: there to be seen only by those in whom its owner has sufficient confidence to allow them to read his treasures. It frequently tells a story its owner considers too sacred for the public gaze and only to be related to friends with whom he would share his joys and sorrows. 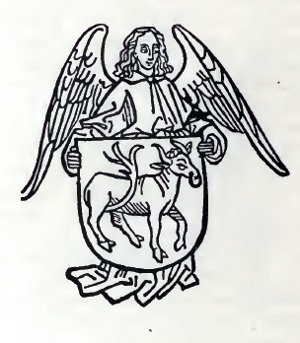 For some time after the appearance of Lord de Tabley's pioneer book on bookplates, a bookplate found in an old book in the Carthusian monastery at Buxheim, in Suabia, was considered the oldest bookplate
known. Copies of it were found in some old board-bound manuscripts which had been presented to the monastery by one Hilprand Brandenburg. The design depicts an angel with outspread wings carrying a shield charged with a device of an ox with a ring in his nose. The authenticity of this bookplate is attested by manuscript notes found in the books containing the bookplate, which set forth details concerning the gift by Brandenburg. In a copy of Quæstiones super primo libro Sententiarum, by (Saint) Bonaventura, this gift inscription reads, translated, 'This book belongs to the Carthusian Monastery of Buxheim, near Memmingen, and was given by Hilprand Brandenburg of Biberach.'

The bookplate, with a similar inscription below it, has also recently been found in an old copy of Sermones Dominicales, by Antonius de Bitonto. Later on, similar inscriptions led to the discovery of two other bookplates, one found in an old Latin vocabulary which, it is thought, antedates the Brandenburg, and another found at Buxheim which is of about the same age as the Brandenburg. Both are heraldic, the first bearing a device of a hedge-hog holding a flower in its mouth, whilst the second is charged with the arms of one Wilhelm von Zell.

Thus we see that the bookplate is an old institution, having been originally used to mark the gift and ownership of manuscript books in Germany about 1480. The earliest English bookplate dates circa 1520, the earliest French design circa 1574, whilst in Sweden the date is circa 1575, in Switzerland circa 1607, and in Italy circa 1623. America is not far behind with the Steven Day label dated 1642. One of the sixteenth century English bookplates was made for no less a personage than Sir Nicholas Bacon, the father of Sir Francis Bacon.

We repeatedly find important names connected with the history of bookplates as time goes on. What is believed to be the first mention of this subject in English literature is where that beloved old gossip, Samuel Pepys, writing on July twenty-first, 1668, says, 'Went to my plate-maker's, and there spent an hour about contriving my little plates, for my books of the King's four Yards.' 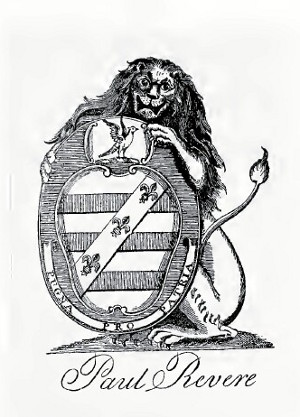 A list of early American bookplates reads like a roster of important Colonial personages. George Washington and half a dozen other Presidents have used them and all of our important engravers, both old and modem, have made numerous bookplates. Among the latter, it is interesting to know that Paul Revere, of historical fame, engraved some particularly fine examples. The story is the same in England, France, Italy and other countries. In England such artists as Bartolozzi, Bewick, Faithome, Hogarth and others who rank with them have left a magnificent number of designs for such personages as Byron, Carlyle, Cowper, Dickens, Lamb, Southey, Walpole and a literally interminable list of royalty, institutions, and individuals. The Franks collection of bookplates in the British Museum numbers over thirty-five thousand items. The Metropolitan Museum of Art now has a collection approximating twenty-five thousand, whilst the collections of the American Antiquarian Society aggregate over twenty-five thousand American book-plates alone.

Development of the art of the bookplate parallels history, as a study of it readily shows. The early use of heraldry is an example. In France at the time of the revolution we find the Phrygian cap of liberty replacing the crest and coronet, and titles giving way to Citoyen. A future study of Russian bookplates will probably show similar results. The art of the bookplate changes, and by changing remains a living thing that will develop and continue to exist as long as men reverence learning and books.